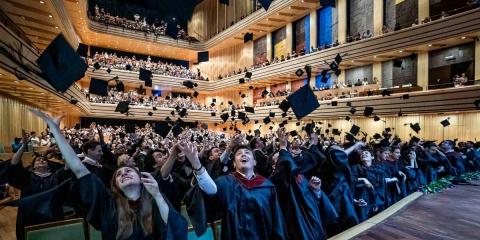 Nearly a thousand family members and friends filled the auditorium at the Palace of Arts in Budapest, as Central European University (CEU) conferred 60 doctoral degrees, 486 master’s degrees and 13 non-degree certificates on the university’s 28th graduating class. The students hailed from 85 countries and spanned all areas of academic study at CEU.

"Today is special because we celebrate the achievements of the most resilient generation of students in the history of the university, the Class of 2019. Today is about you, our wonderful and unwavering graduating students," Provost and Pro-Rector Liviu Matei said in his welcome to those gathered.

In her welcoming remarks in Hungarian, Pro-Rector for Social Sciences and Humanities Eva Fodor reflected on CEU’s place in Budapest and its conferral of Hungarian degrees. "Central European University has been part of the community of Hungarian higher education institutions for a decade now. This year, more than 150 of our students will receive Hungarian accredited master and doctoral degrees alongside their American accredited ones," she said.

In his opening remarks, CEU President and Rector Michael Ignatieff told the Class of 2019: “We exist to help you create your futures. We exist to train you in the values of freedom: responsibility for others, fearlessness in thought and action, unyielding commitment to the public good of people, community and nation.”

After more than two years of political uncertainty, the university will open another campus in Vienna, Austria in September 2019 and begin moving all degree-related activities there over the following academic year. Coupled with the crowd’s joyous celebration of academic achievement during the graduation ceremony was the bittersweet sense that a chapter of CEU history was coming to a close.

“This is, I think we can be sure, the last graduation in this great hall,” said Ignatieff. “Our course is now set to open a campus in Vienna. In years to come future graduations will take place in a city that has welcomed us. Make no mistake however. This city will remain our spiritual home.”

Leon Botstein, Chairman of the Board of Trustees, pointed out that "CEU has been forced out, not by the technicalities of law, but by the hostility to the enterprise to which CEU is dedicated, and that is the freedom of research and of learning." Professor Botstein expressed the Board's tremendous gratitude towards to the citizens of Budapest who joined with the CEU community, saying that university “owes a lot to the people of this great city.”

All speakers shared a sense of loss that this year’s graduates will be the last CEU cohort to complete their studies solely in Budapest. However, as Adam Bodnar (Legs ’01), Alumni Speaker and Commissioner for Human Rights of Poland, told the latest members of CEU alumni: “You are not alone. This university has already changed Europe. It has taught numerous graduates - now civil servants, scholars, politicians, businessmen and activists - how to build modern states and how to serve citizens….You can survive periods of threats for democracy and rule of law, and not lose your belief in the sense of the free world, by building persistently the open society.”

Melody Barron (Gender ‘19), Student Speaker, noted that “Knowledge should have no borders and no boundaries, and if there is a lesson I learned here at CEU, it is that in order to keep knowledge borderless and boundary less, we must fight for it. The CEU mission is a mission I believe in, it’s the reason I applied here, this oasis of critical thought in a growing desert of academic persecution.”

Alexander G. Soros, philanthropist and deputy chair of the Open Society Foundations (OSF), also addressed the students in a moving reminder of the days when his father and CEU founder George Soros used to shake the hand of every graduating student.

Congratulating the gathered students, Alexander Soros also praised the whole CEU community for what it has endured over the past two years. He noted that while the Hungarian government has claimed that CEU chose to leave Budapest, that is simply is not true. “CEU has been banned. And as a result, effectively expelled from Hungary. This expulsion is part of a broader campaign to crush academic freedom and other liberties.”

Alexander Soros added that CEU is not defeated. To ensure that the university will instead flourish in Vienna and around the world, Soros committed the OSF to the recapitalization of CEU’s endowment, thus funding CEU for more success in the future.

The ceremony concluded with Ignatieff awarding the CEU Open Society Prize to American economist and university professor at Columbia University, Joseph E. Stiglitz. Stiglitz, who received the Nobel Memorial Prize in Economic Sciences in 2001, is known for his pioneering work on asymmetric information. The author of several bestselling books, including The Price of Inequality (2012), Stiglitz researches income distribution, risk, corporate governance, public policy, macroeconomics and globalization.

In his acceptance remarks, Stiglitz found overlapping goals shared between his own work and that of the Open Society Foundation, George Soros and CEU. “I’ve always viewed my academic work as not just an end in itself, but as a means to an end—creating a must just society, a more open society, a society with more respect for human rights,” said Stiglitz.

Stiglitz continued: “Nothing is more symbolic of the meaning of an open society than a free press and academic freedom.”