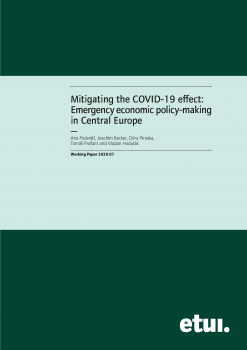 This paper analyses the economic policy-making in the first phase of the epidemic in five Central Europe countries, Austria, Czechia, Hungary, Slovakia and Slovenia, whose economic structure is characterized by strong export orientation. The focus is on the participatory character of the governments' COVID-19 packages, on their design, and targets.

The authors find that while social actors were selectively integrated in the policy-making, depending on the established tripartite framework and government political composition, support packages deployed similar tools (such as short-time work provisions, loan and guarantee programmes through development banks, tax/security payment deferrals) though with varying weight and scope. Only in Austria and Czechia the governments adopted specific measures for the export sector. Additionnally, the scope of the fiscally immediately relevant measures is rather limited, resulting in lesser loan programs and social provisions.

Although the budgetary limitations have been temporarily suspended by the European Union, the governments in the periphery, regardless of their political inclinations, remain constrained by their uneven integration into the EU's single market, as well as by their limited access to international financial markets.