The emergence of modern world politics 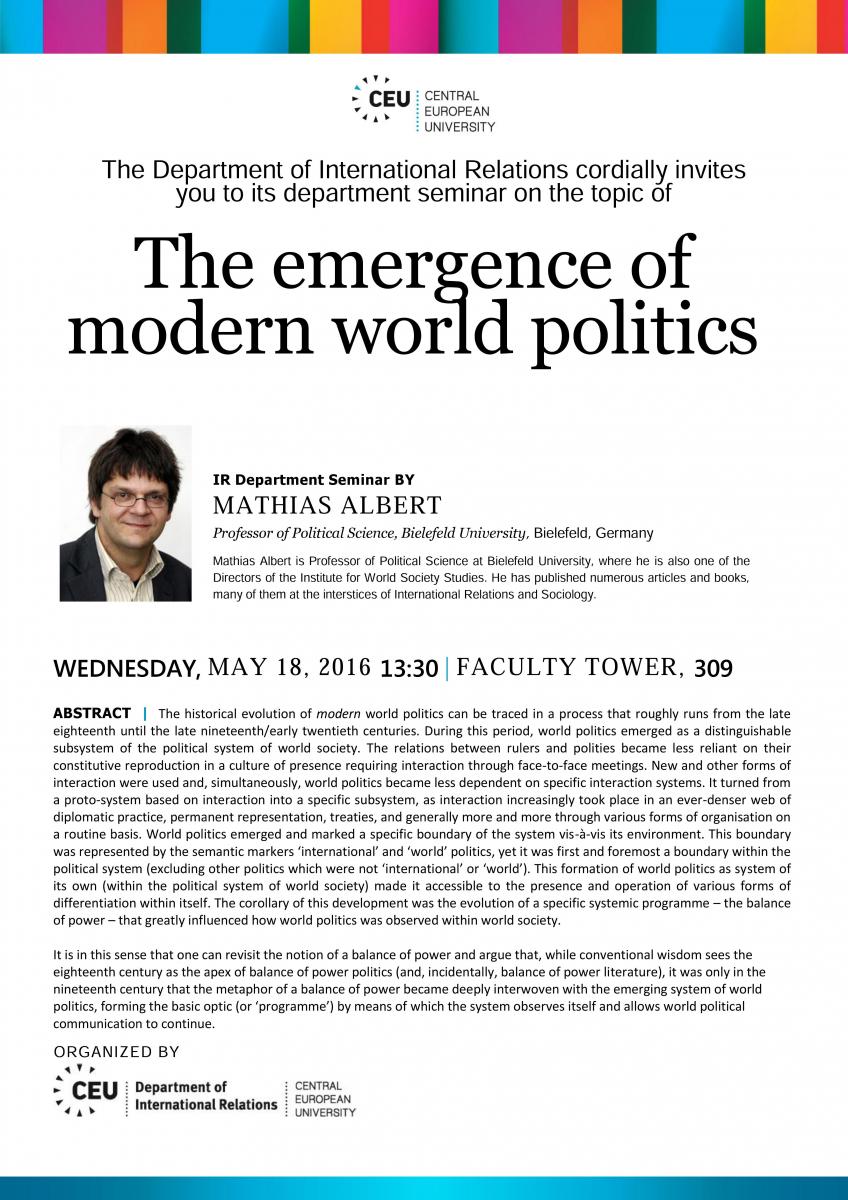 The emergence of modern world politics

The historical evolution of modern world politics can be traced in a process that roughly runs from the late eighteenth until the late nineteenth/early twentieth centuries. During this period, world politics emerged as a distinguishable subsystem of the political system of world society. The relations between rulers and polities became less reliant on their constitutive reproduction in a culture of presence requiring interaction through face-to-face meetings. New and other forms of interaction were used and, simultaneously, world politics became less dependent on specific interaction systems. It turned from a proto-system based on interaction into a specific subsystem, as interaction increasingly took place in an ever-denser web of diplomatic practice, permanent representation, treaties, and generally more and more through various forms of organisation on a routine basis. World politics emerged and marked a specific boundary of the system vis-à-vis its environment. This boundary was represented by the semantic markers ‘international’ and ‘world’ politics, yet it was first and foremost a boundary within the political system (excluding other politics which were not ‘international’ or ‘world’). This formation of world politics as system of its own (within the political system of world society) made it accessible to the presence and operation of various forms of differentiation within itself. The corollary of this development was the evolution of a specific systemic programme – the balance of power – that greatly influenced how world politics was observed within world society.

Mathias Albert is Professor of Political Science at Bielefeld University, where he is also one of the Directors of the Institute for World Society Studies. He has published numerous articles and books, many of them at the interstices of International Relations and Sociology. Latest books include: Bringing Sociology to International Relations. World Politics as Differentiation Theory (co-ed. with  Barry Buzan and Michael Zürn; Cambgridge: Cambridge University Press 2013), and A Theory of World Politics (Cambridge: Cambridge University Press 2016). He is also active in youth research. The latest book here is: Jugend 2015. 17. Shell Jugendstudie (with Klaus Hurrelmann, Gudrun Quenzel and TNS Infratest Sozialforschung; Frankfurt am Main: S. Fischer).